Along with the strategy of leaving broadleaf weeds comes need to satiate my intense curiosity of everything around.

A beautiful but sad looking flower caught my my eye. Striking white and purple flowers have a mesmerizing shape but they never open fully giving them a wilted, mournful appearance. 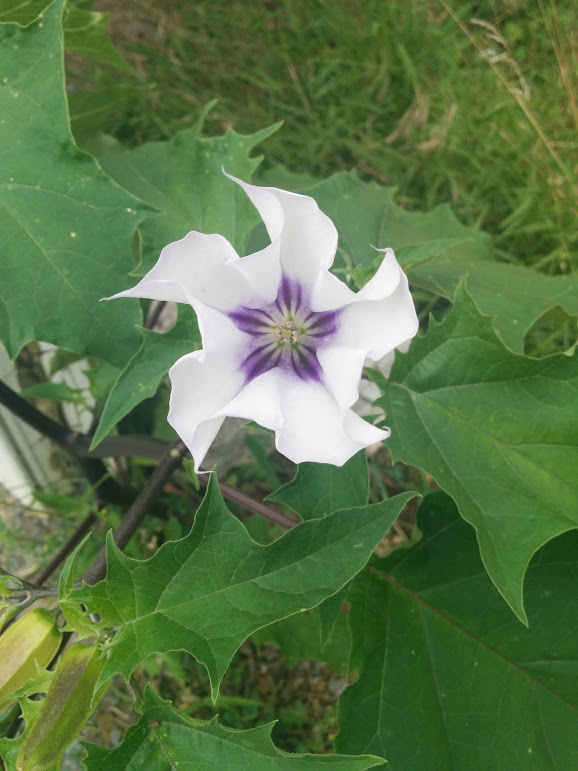 I keyed it out to Datura stramonium aka Jamestown Weed.

Turning to google, I came across this excerpt from The History and Present State of Virginia, 1705 retrieved from the University of North Carolina at Chapel Hill.

The James-Town Weed (which resembles the Thorny Apple of Peru, and I take to be the plant so call’d) is supposed to be one of the greatest coolers in the world. This being an early plant, was gather’d very young for a boil’d salad, by some of the soldiers sent thither to quell the rebellion of Bacon (1676); and some of them ate plentifully of it, the effect of which was a very pleasant comedy, for they turned natural fools upon it for several days: one would blow up a feather in the air; another would dart straws at it with much fury; and another, stark naked, was sitting up in a corner like a monkey, grinning and making mows [grimaces] at them; a fourth would fondly kiss and paw his companions, and sneer in their faces with a countenance more antic than any in a Dutch droll.

In this frantic condition they were confined, lest they should, in their folly, destroy themselves — though it was observed that all their actions were full of innocence and good nature. Indeed, they were not very cleanly; for they would have wallowed in their own excrements, if they had not been prevented. A thousand such simple tricks they played, and after eleven days returned themselves again, not remembering anything that had passed.

Fortunately, it sounds like those soldiers had a good guardian keeping an eye on them!